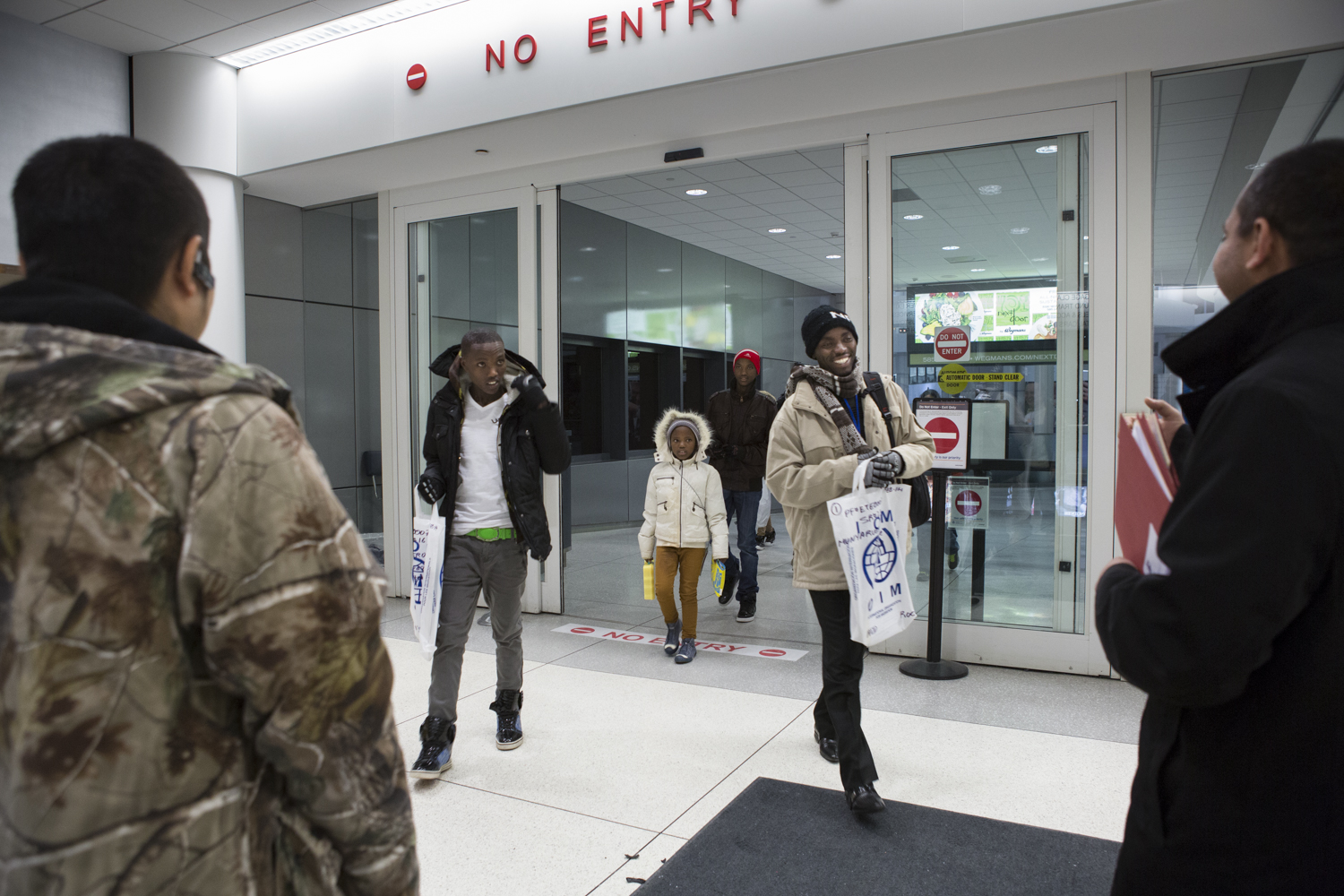 Muhire Munyarugero, 28, (center right) is greeted by his case manager Birash Rimal (right) upon arrival with his sister and her six children at the Greater Rochester International Airport in Rochester, N.Y. on Tuesday, Feb. 4, 2014. 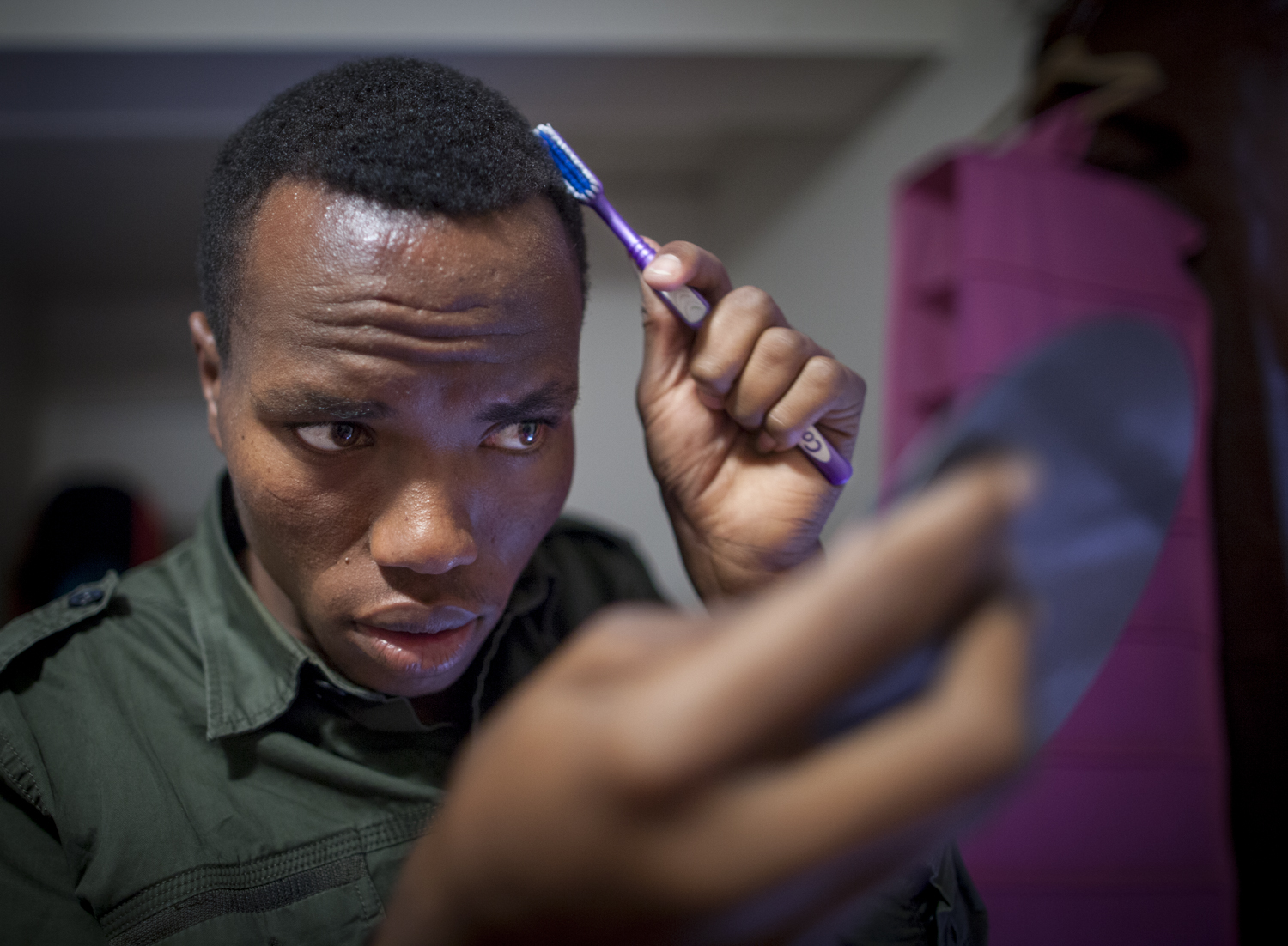 Serge Kamali, 18, brushes his hair with a toothbrush as he prepares to attend church for the first time since arriving in America. He said he did not have a comb but he wanted to look his best. 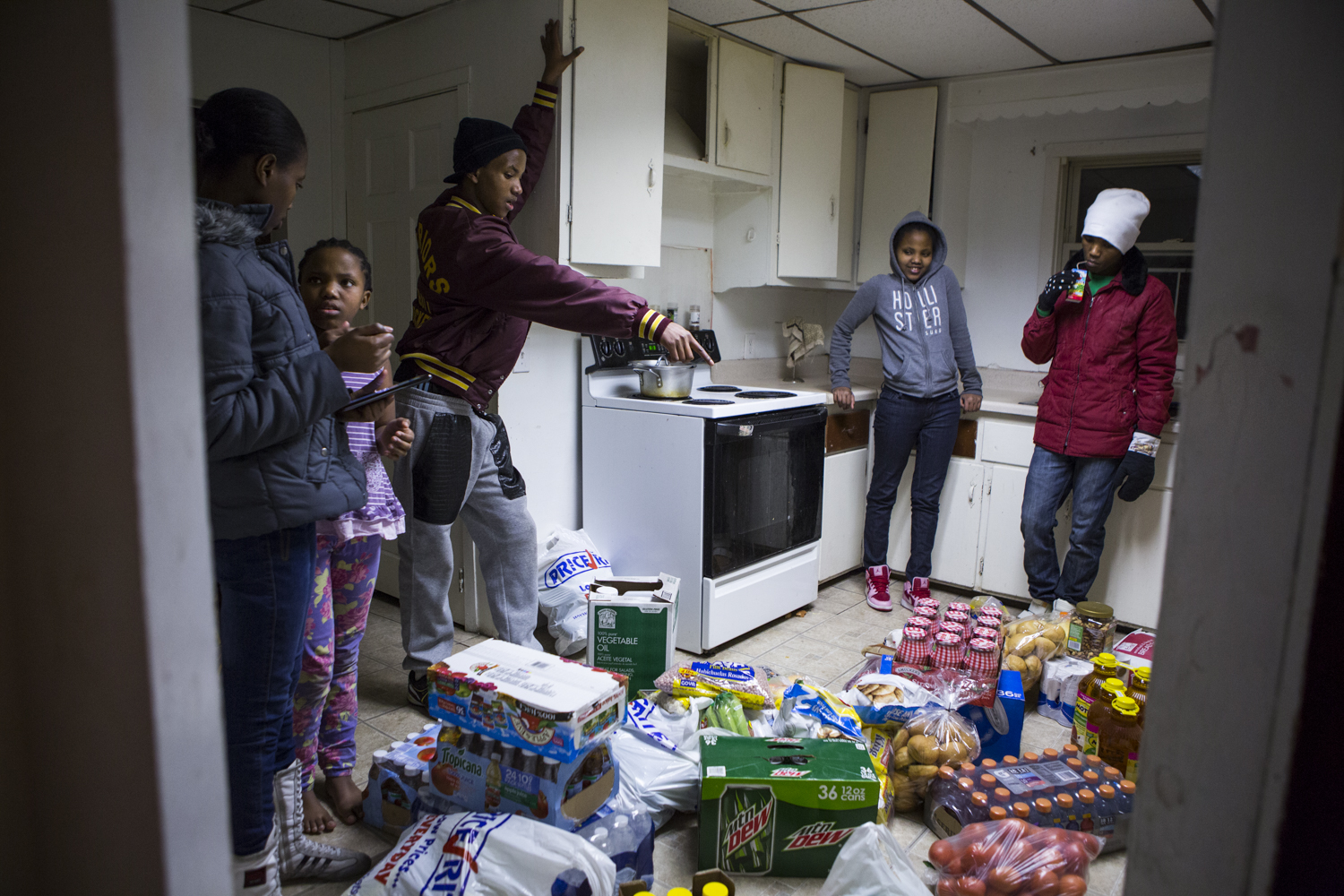 Dyna, Nyota, Sako, Aline and Eslon Kamali talk in the kitchen after returning from a grocery shopping trip to a wholesale store. 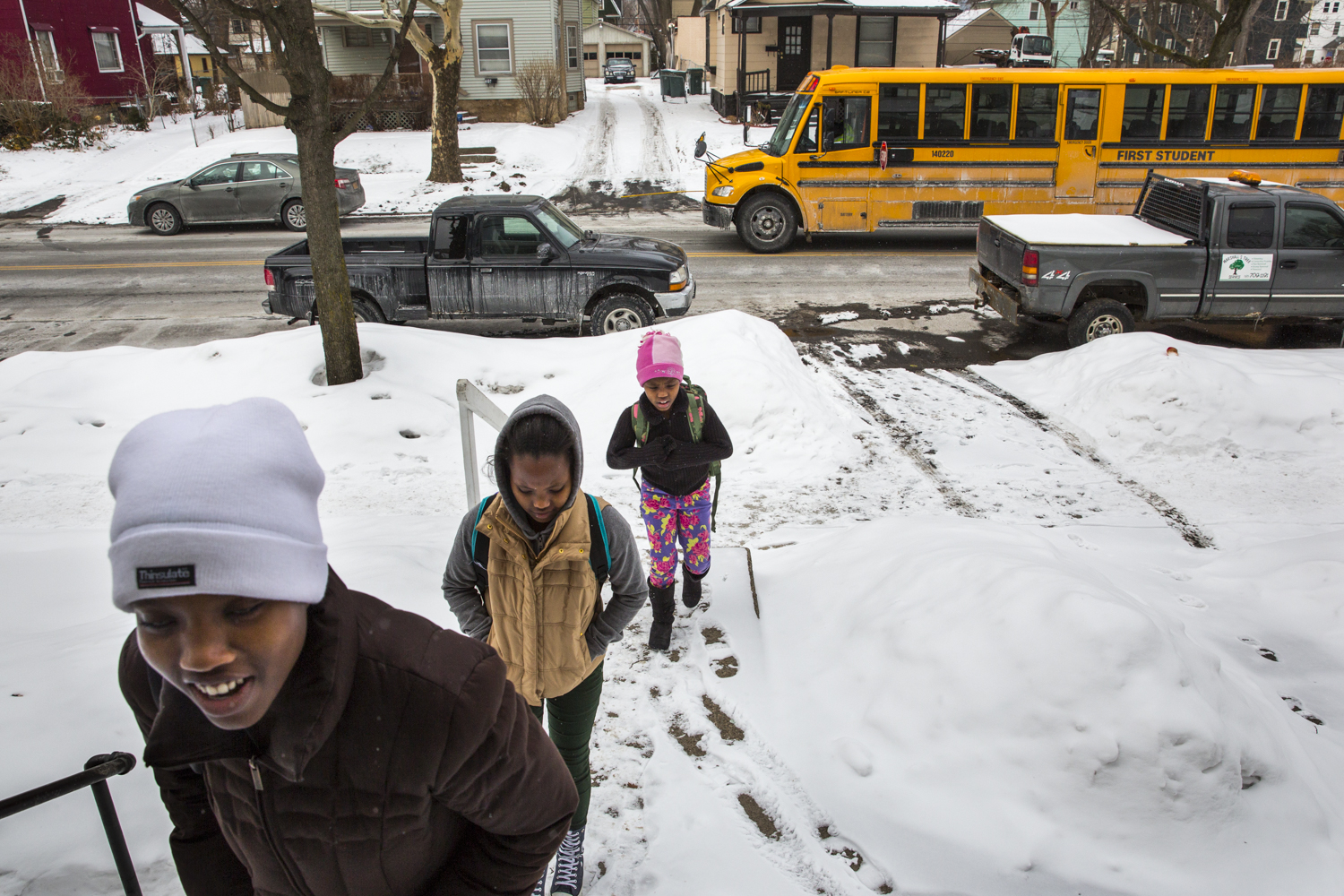 Dyna, Aline and Nyota Kamali return home from their first day of school in Rochester, N.Y..

“What we want most is education for the children. That is my most favorite thing in America," said their uncle Muhire Munyarugero. The Kamali children had to wait one month after arriving before they were able be placed in schools. 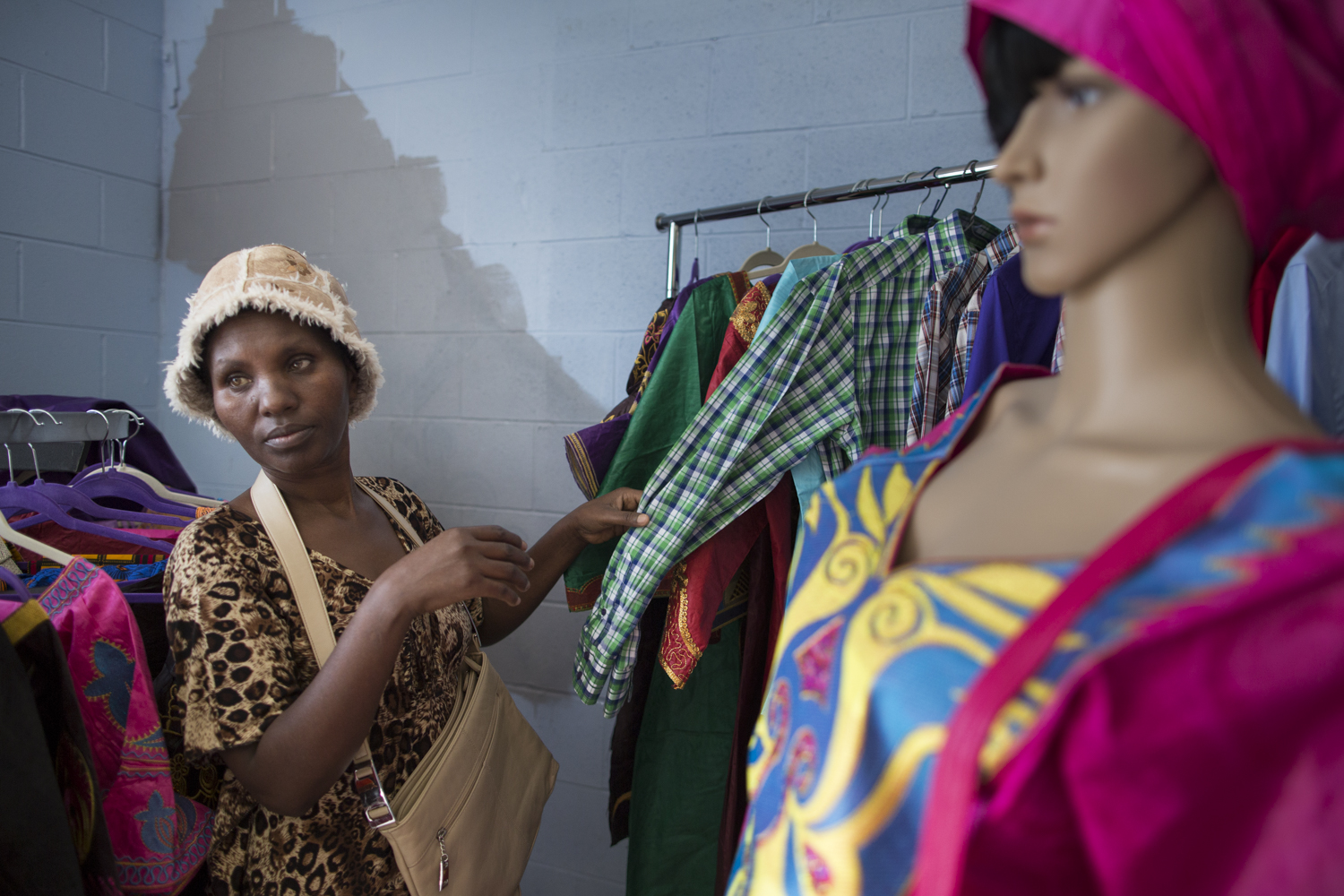 Nyirazana Munyarugero looks at clothes at All Nation Yesu Ni Jibu, an African clothing store. The family was unable to afford to buy new clothes, so they depended on donated clothes from a local charity and later purchased a sewing machine to make their own. 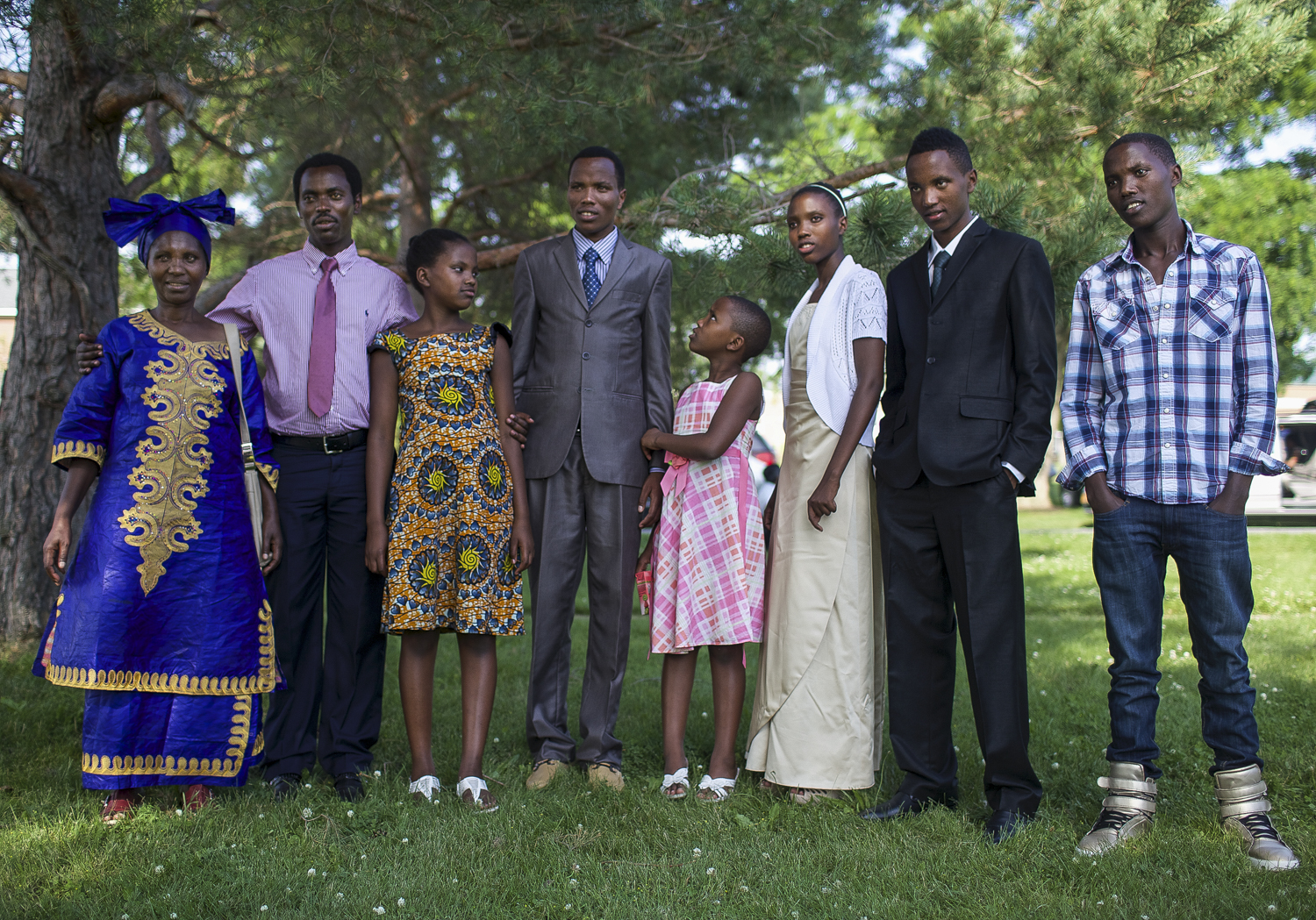 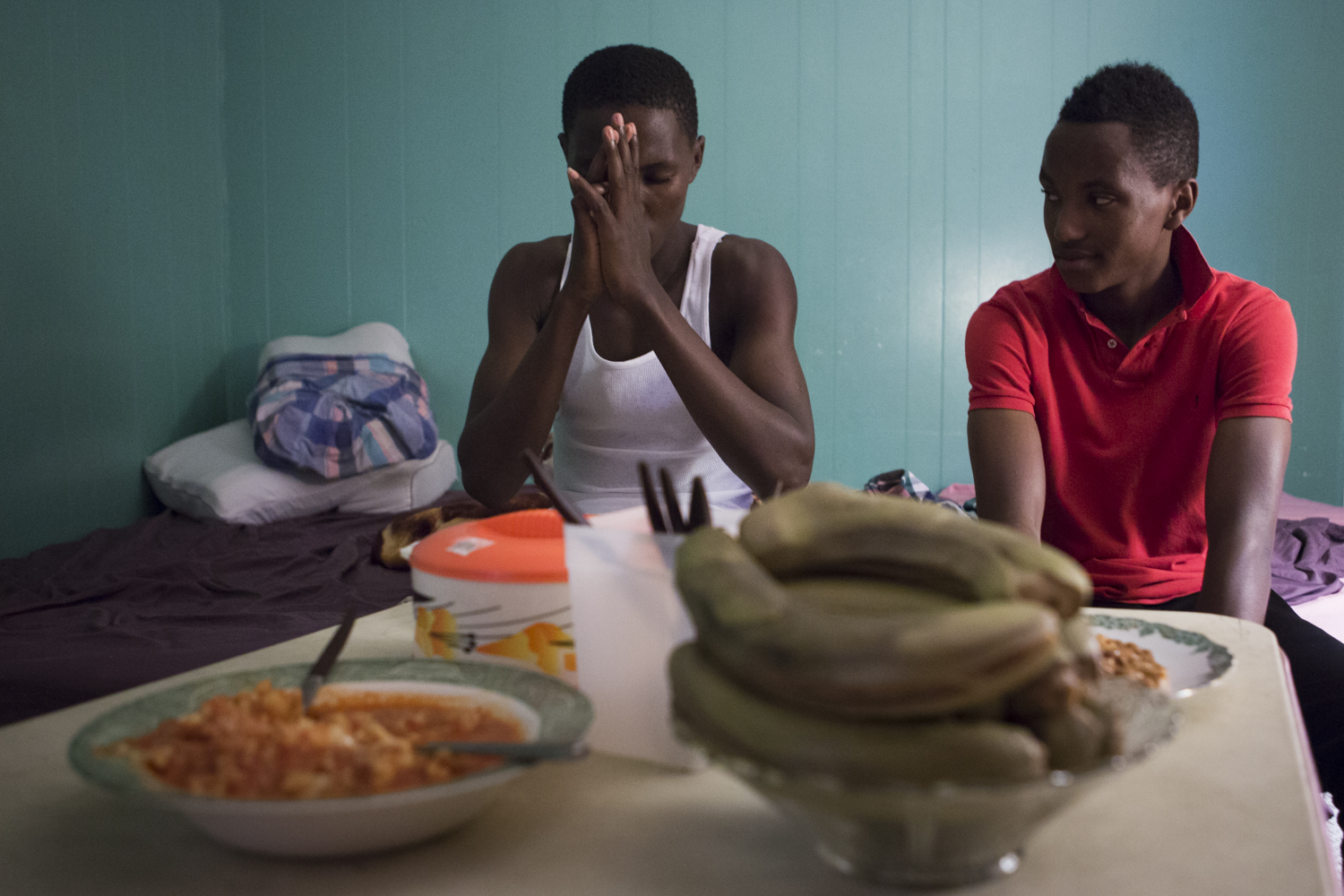 Eslon and Sako Kamali pray before eating dinner in their bedroom on July 4, 2014. On Independence Day, they observed the Sabbath, beginning at sunset on Friday, rather than going out to see fireworks. They are members of the Seventh-Day Adventist Christian Church. 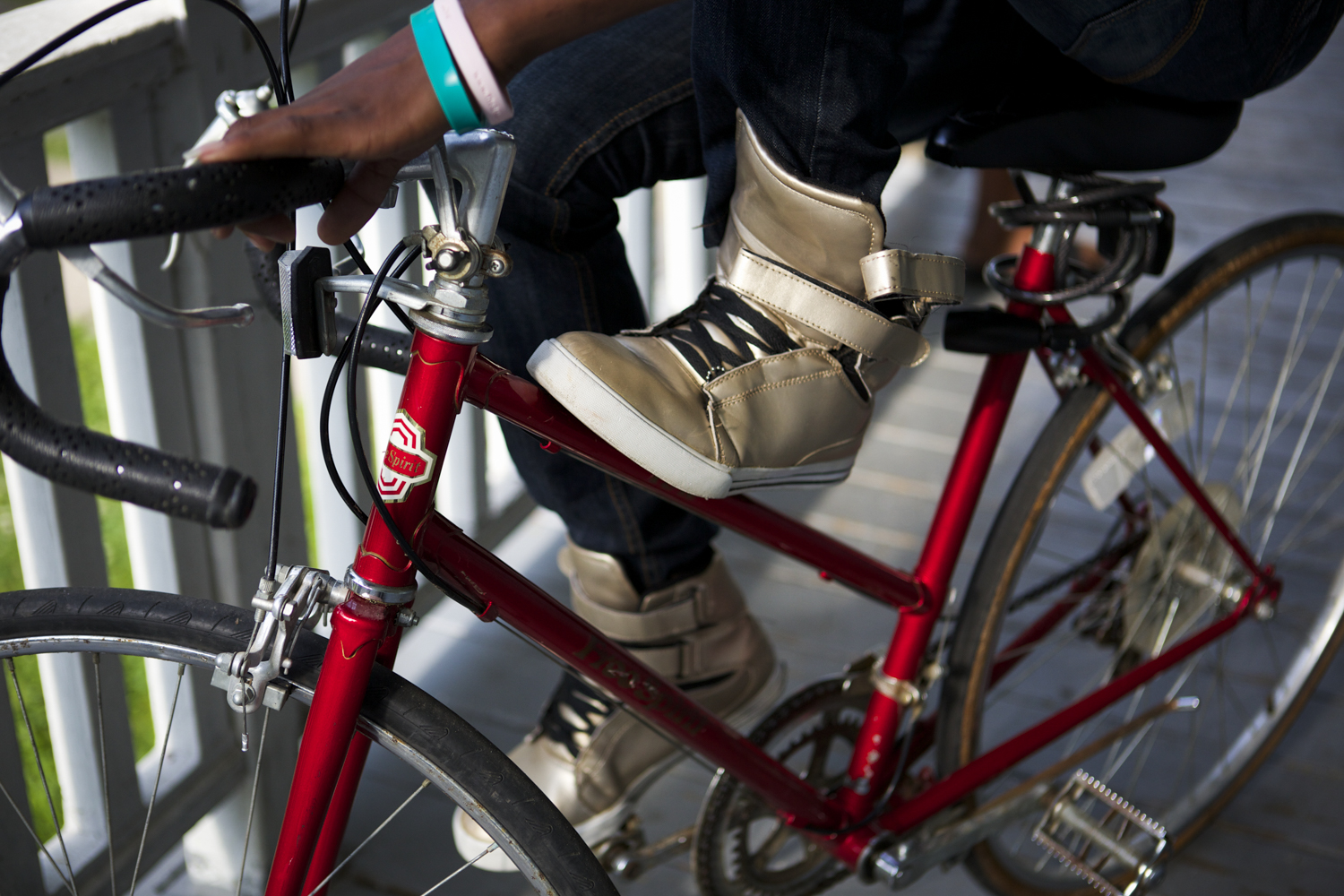 Serge Kamali, 18, sits on his bike on his front porch while wearing gold shoes that he shares with his two brothers. "These are from Ethiopia. They don't make them like this in America," he said. 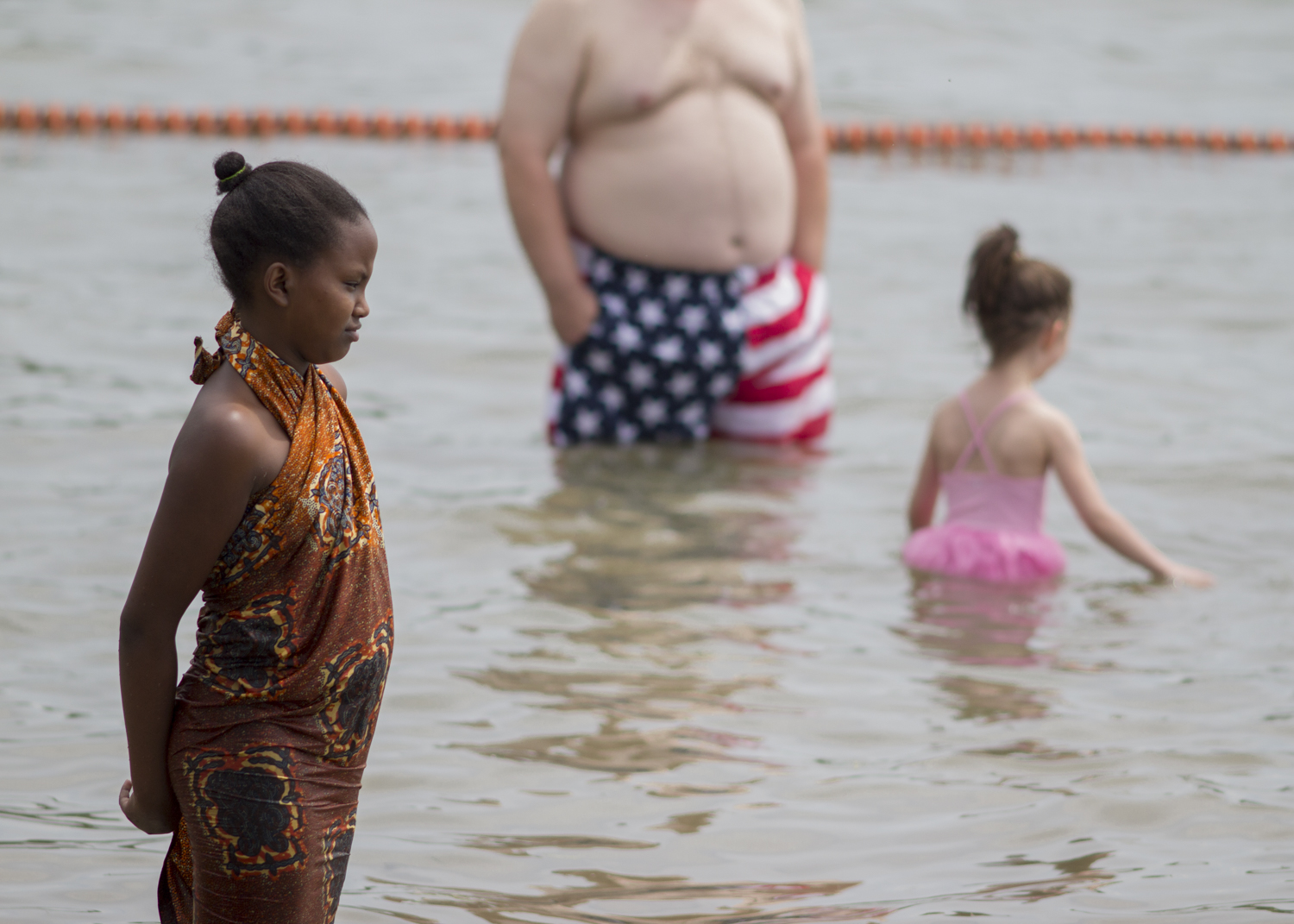 Aline Kamali timidly wades into the water, wearing a makeshift dress because she did not bring any swimwear, at Frontenac Park in Union Springs, N.Y.. Her younger sister, Nyota, loved swimming for the first time and her older sister, Dyna, was afraid of the water and did not go in. 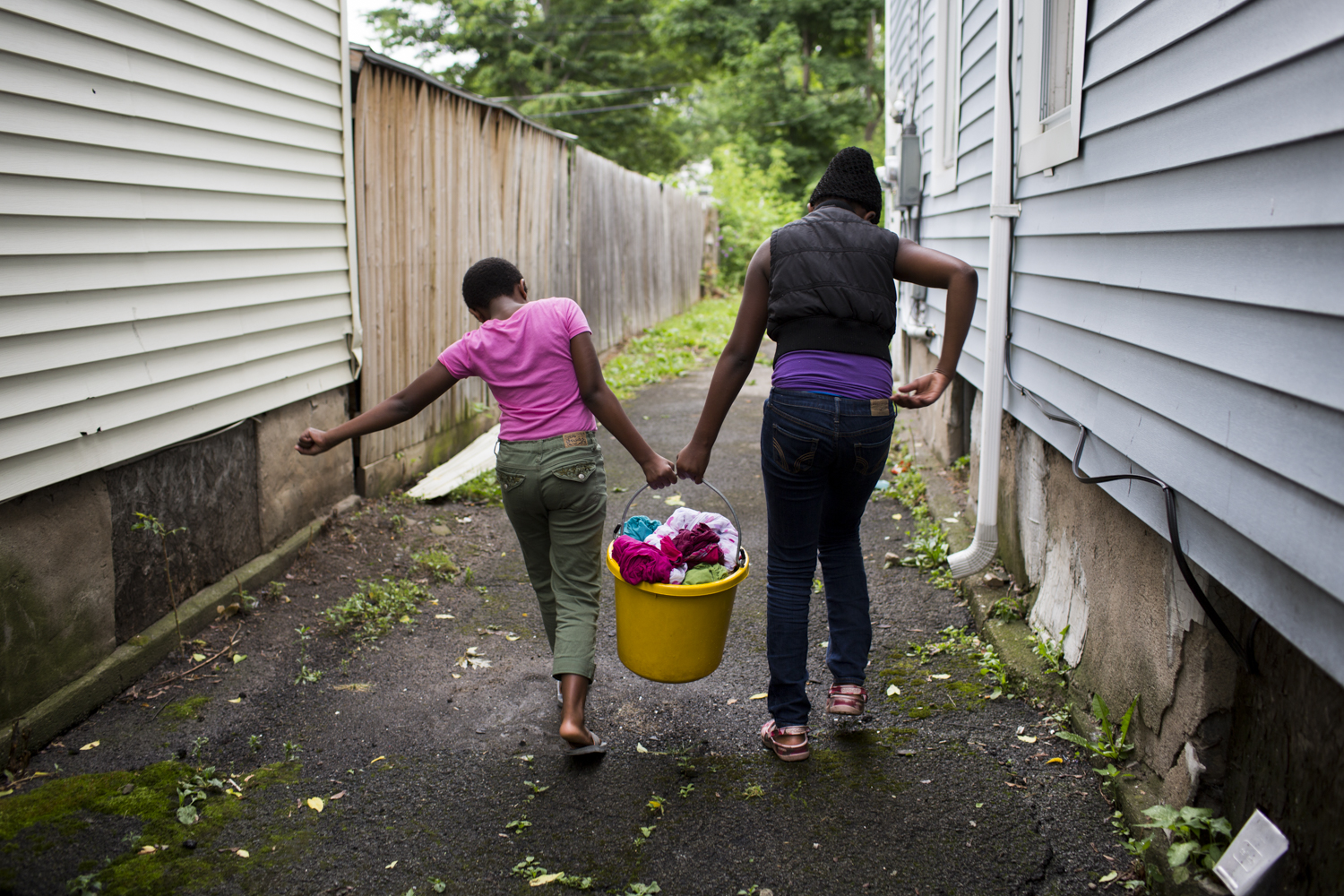 Nyota (left) and Aline Kamali carry hand washed laundry to be hung out to dry. The family has a washing machine and dryer in their basement, but their mother Nyirazana prefers to do the laundry by hand because she finds it relaxing. 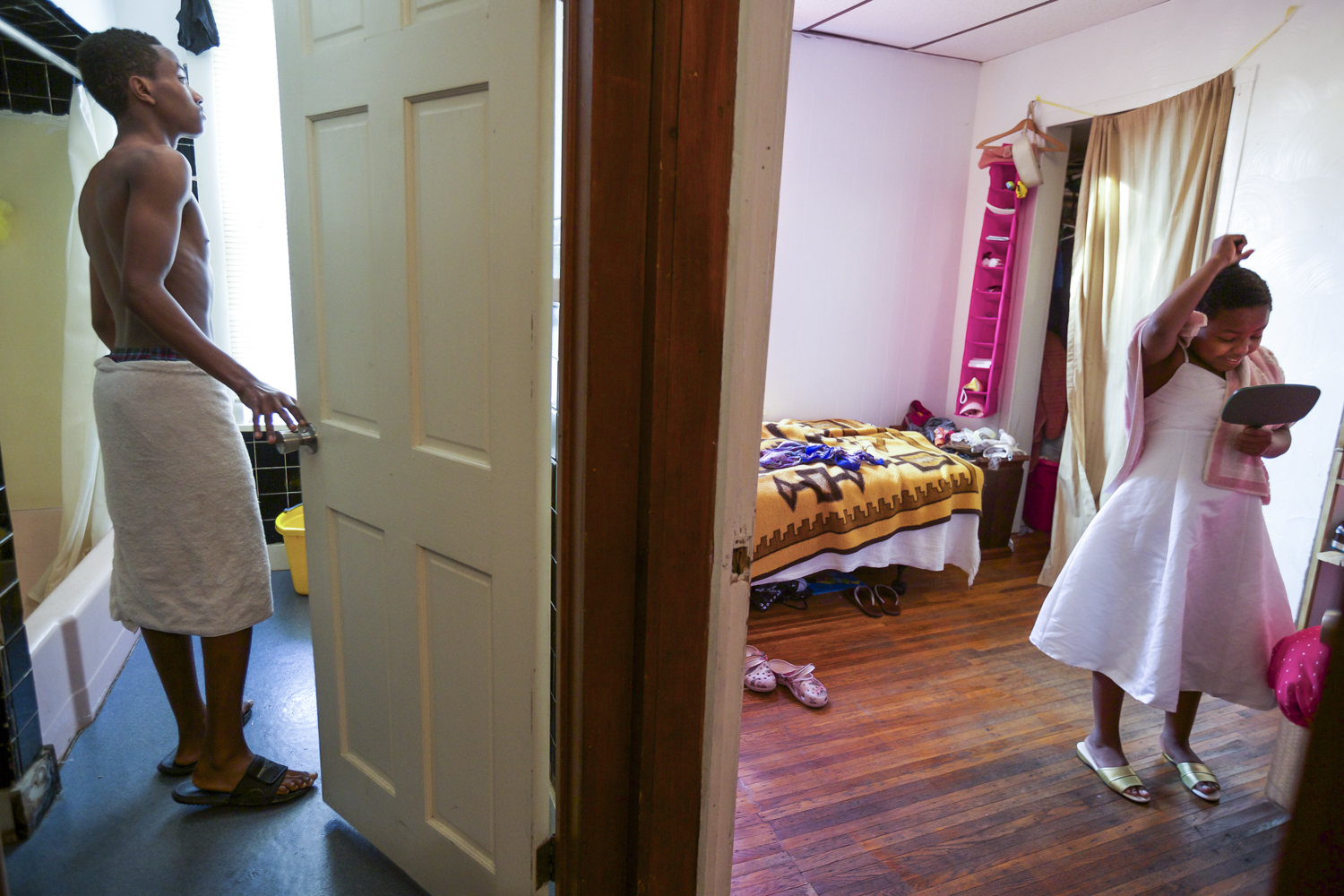 Sako (left) and Nyota Kamali prepare for church. Sako and his two brothers share a bedroom, while Nyota sleeps with her mother but spends time in her sisters' bedroom. 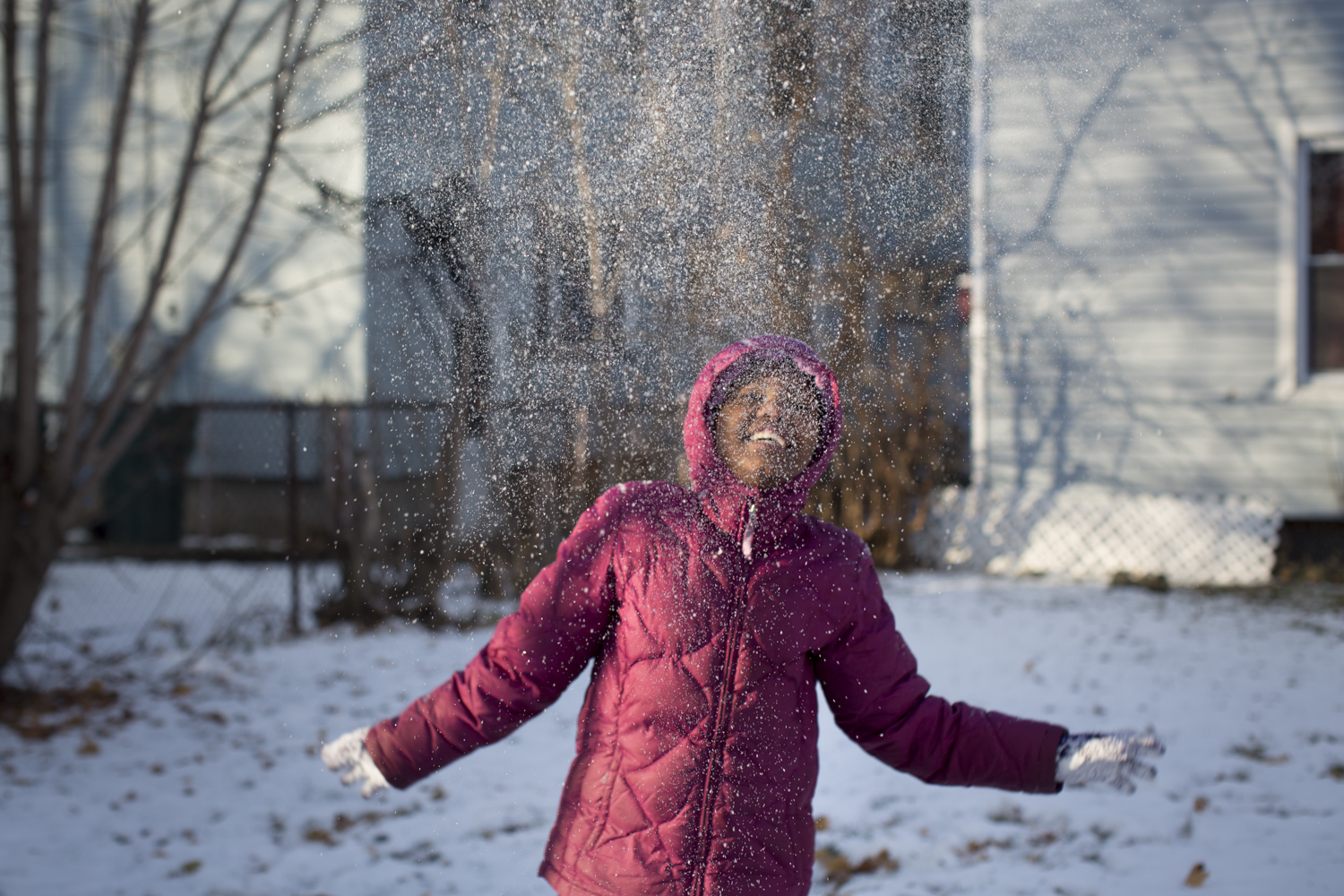 Nyota Kamali, 9, throws snow in the air as she plays outside during one of the first accumulating snowfalls, denoting the beginning of her second winter in Rochester, N.Y.. When the Kamali family first arrived, they were afraid of the snow and feared that the seasons would never change.