The Association of Lincoln Presenters held their annual convention in Lincoln City, Indiana —where Abraham Lincoln spent his youth. 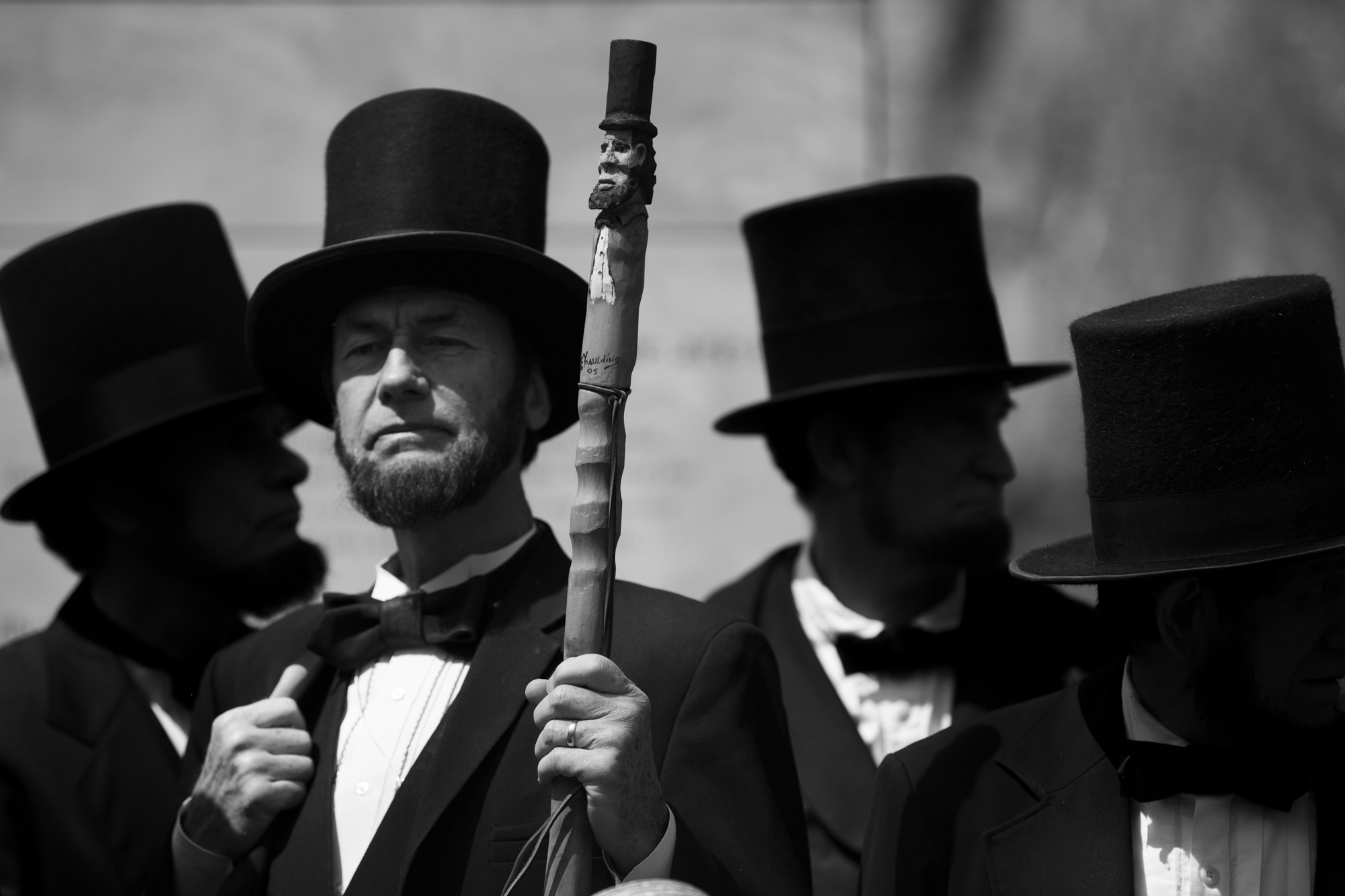 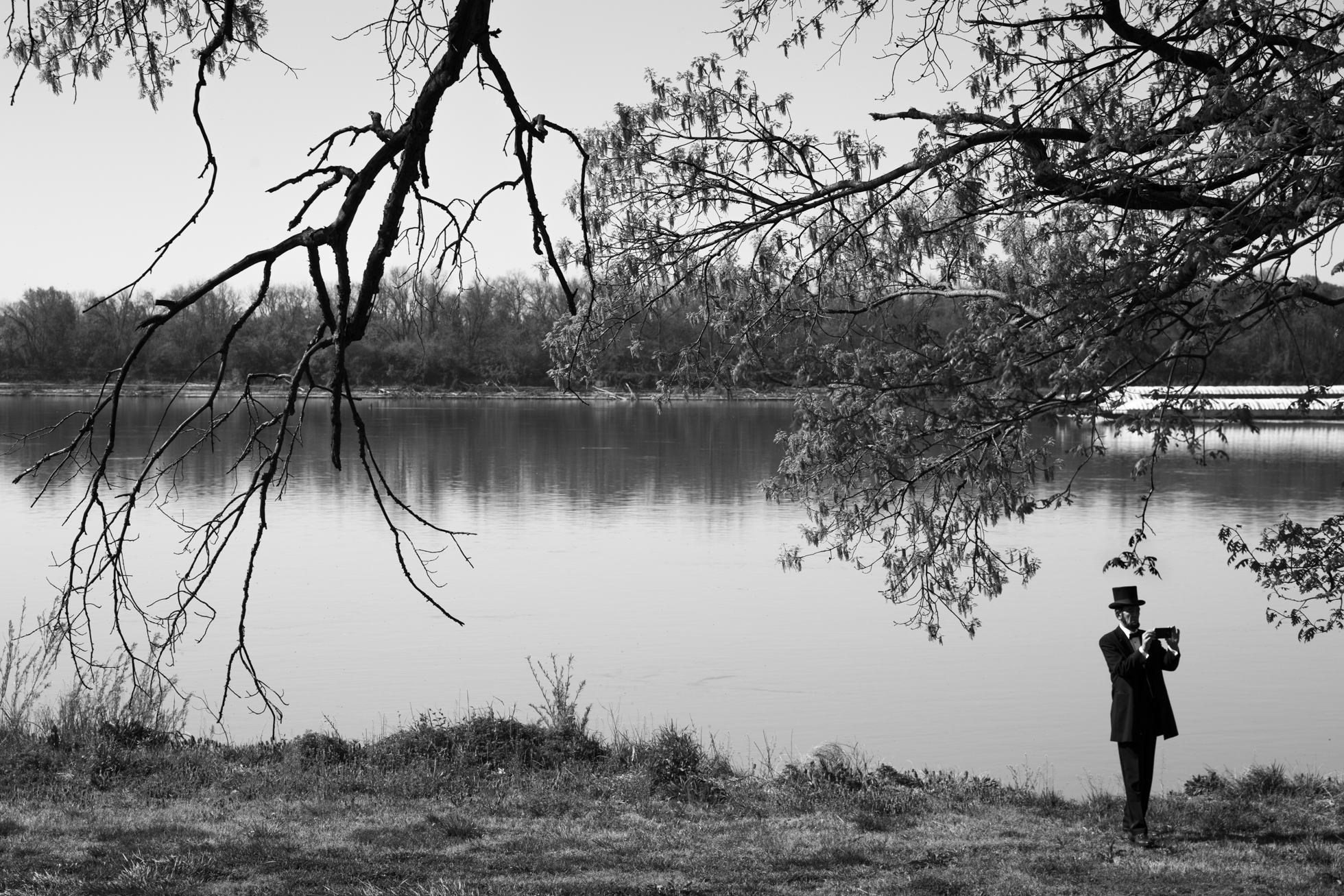 Ron Carley of Detroit uses his smartphone to take a photograph at Lincoln Ferry Park in Grandview during a bus tour through historical sites in Lincoln's life. The park is located along the Ohio and Anderson Rivers where Lincoln worked as a youth for James Taylor. 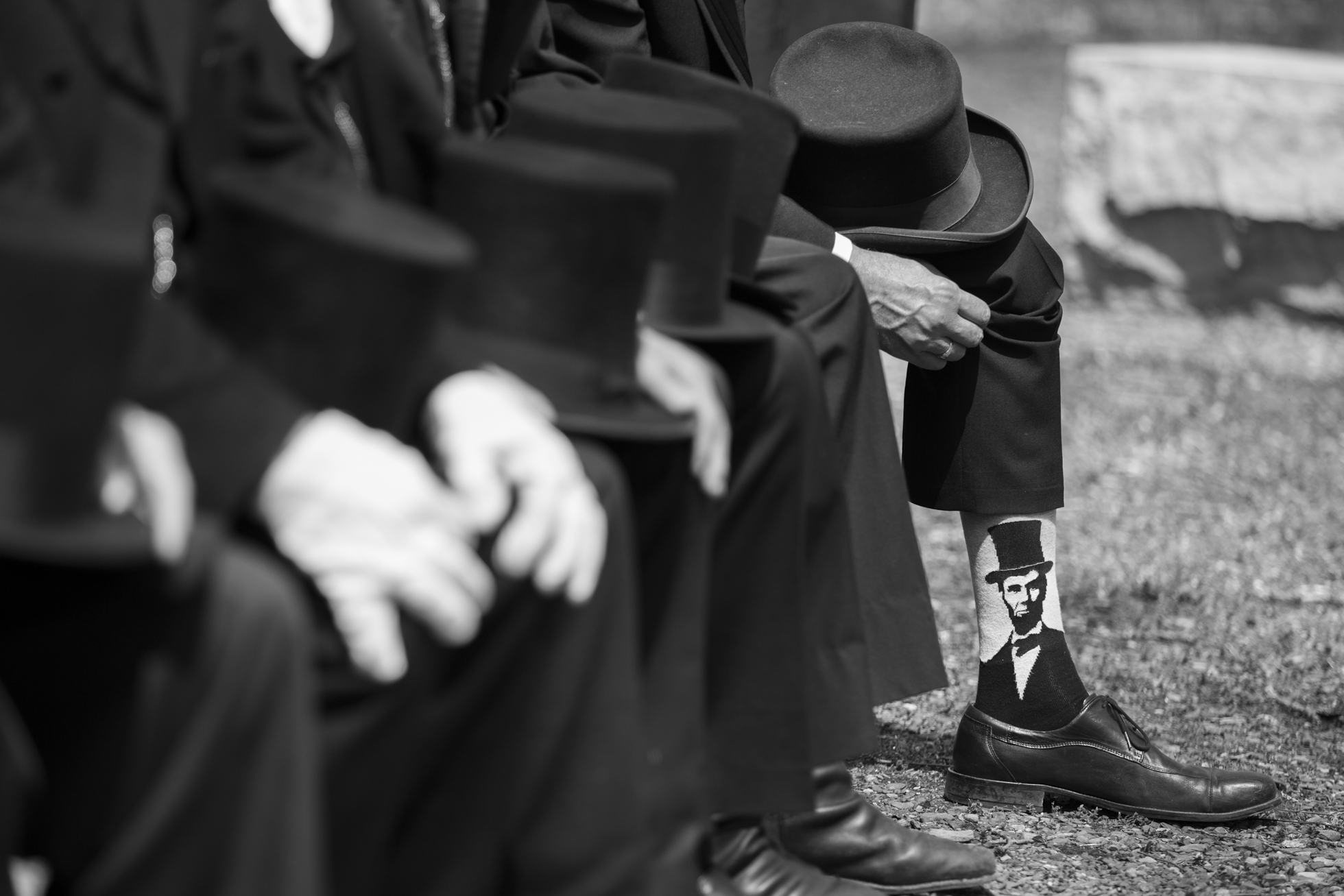 Ron Carley of Detroit shows off his Abraham Lincoln socks during a group photo of the Association of Lincoln Presenters at Bicentennial Plaza in Lincoln State Park in Lincoln City. 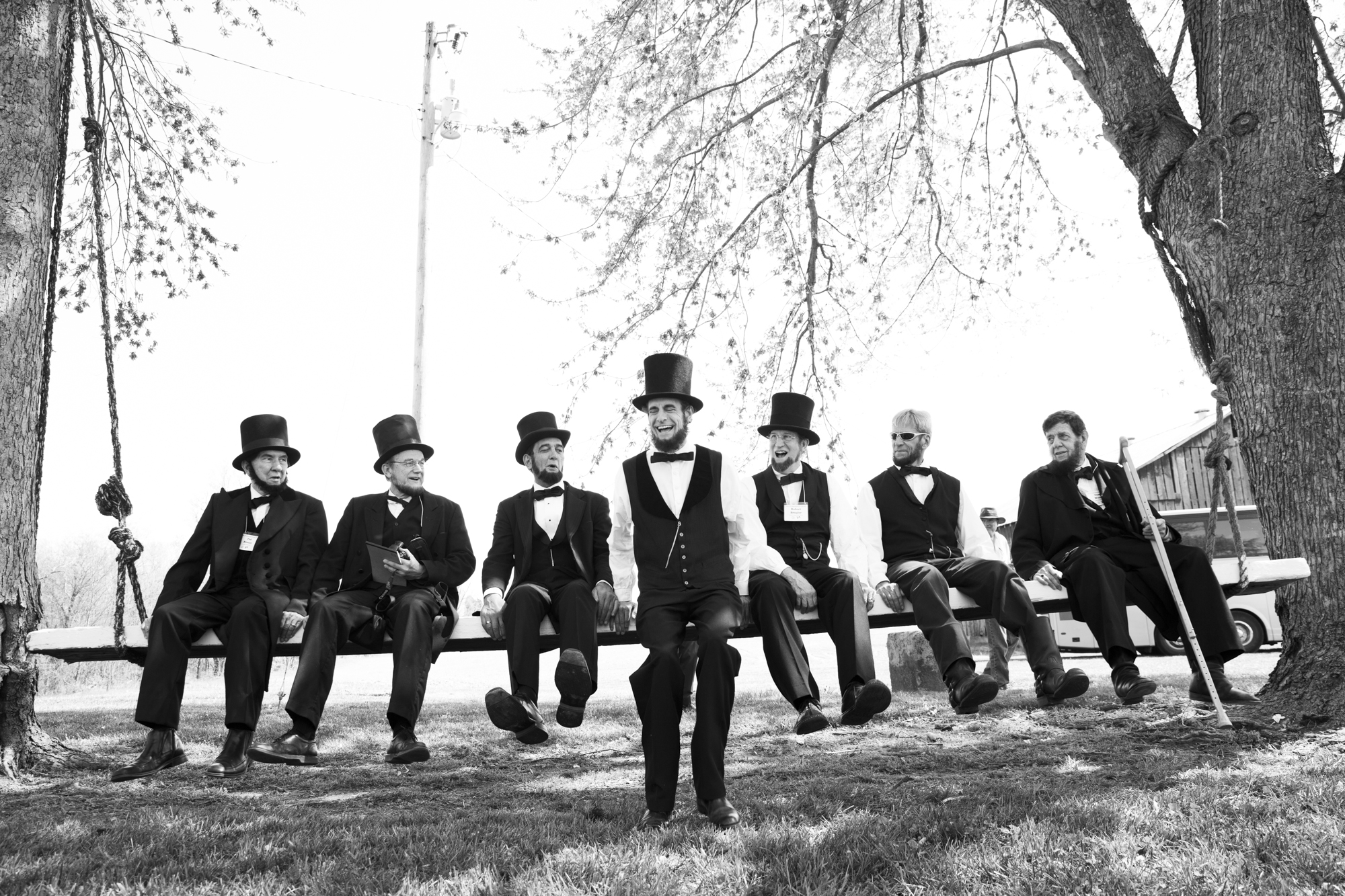 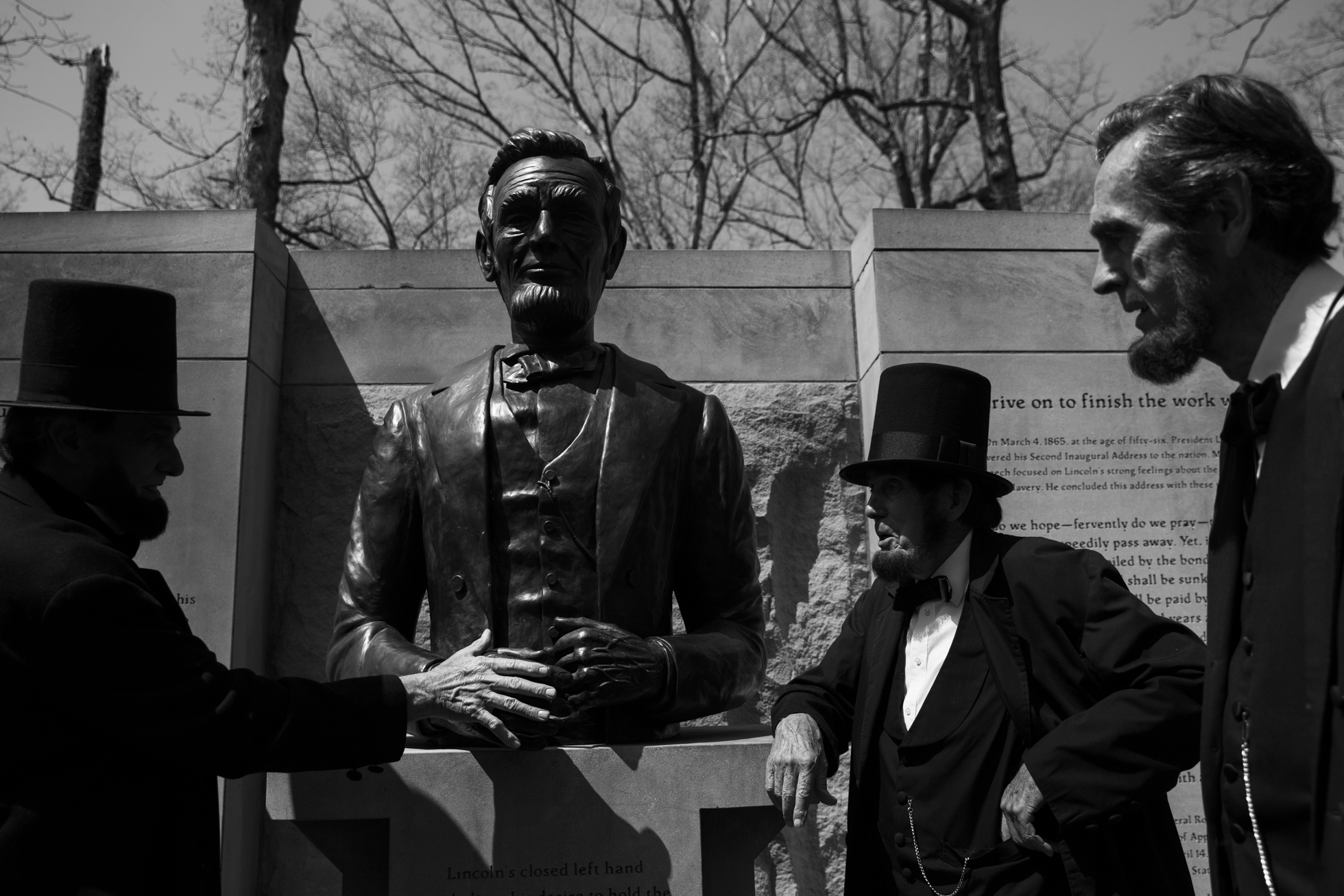 Charles Kleiner of Cincinnati, Ohio, compares his hand to the those of a twice-life-size bronze bust of Abraham Lincoln as he chats with Jim Sayre of Lawrenceburg, Ky., and John Mansfield of Nashville, Tenn., at Bicentennial Plaza in Lincoln State Park in Lincoln City. 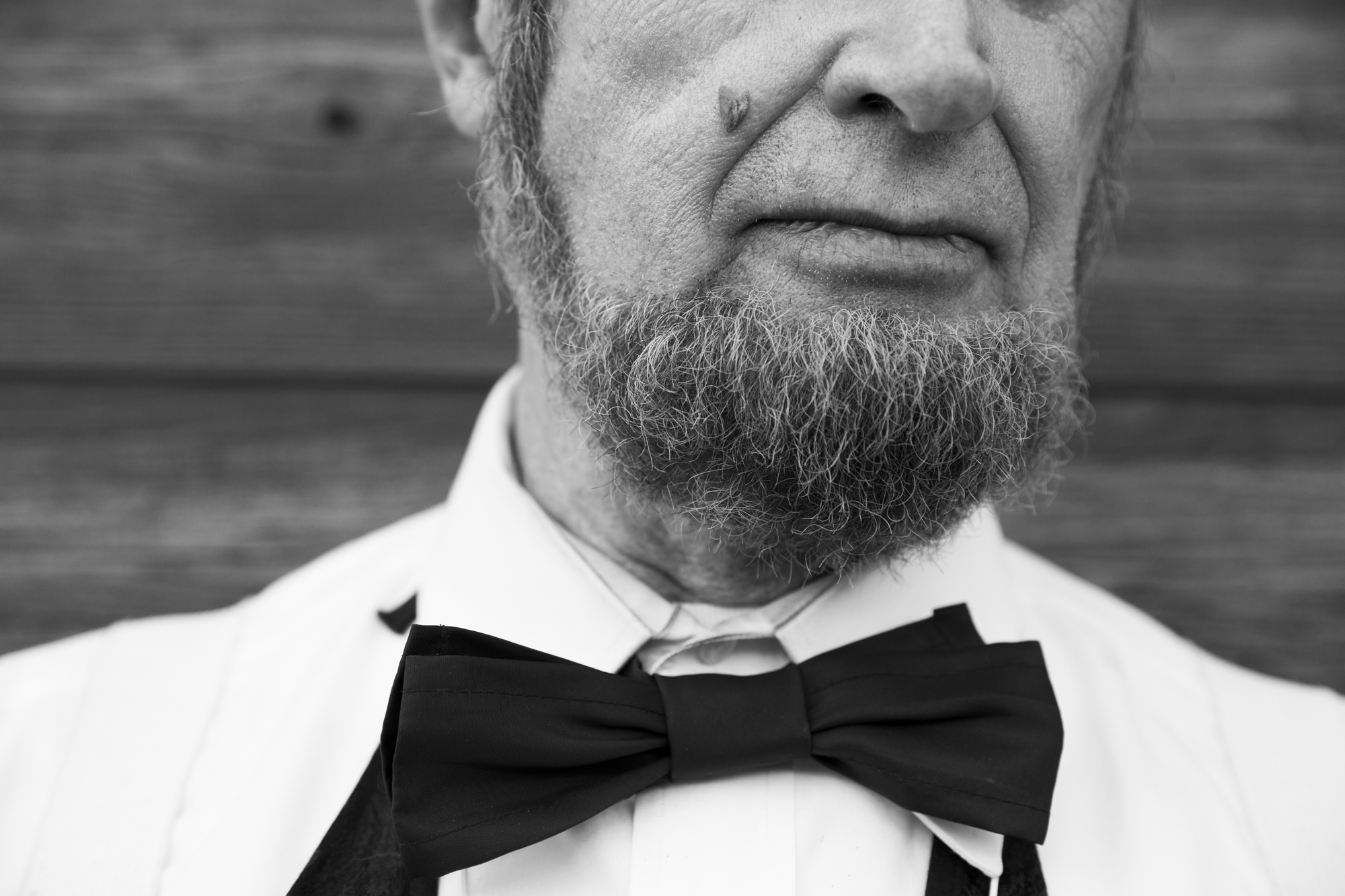 Gerald Pitts of Greenwood, SC wears an artificial mole made from a pencil eraser to complete his Abraham Lincoln persona.

"It saved my life," said Pitts, explaining that he was diagnosed with a malignant melanoma in situ on his cheek that he might not have noticed if he didn't regularly apply his pencil eraser mole. 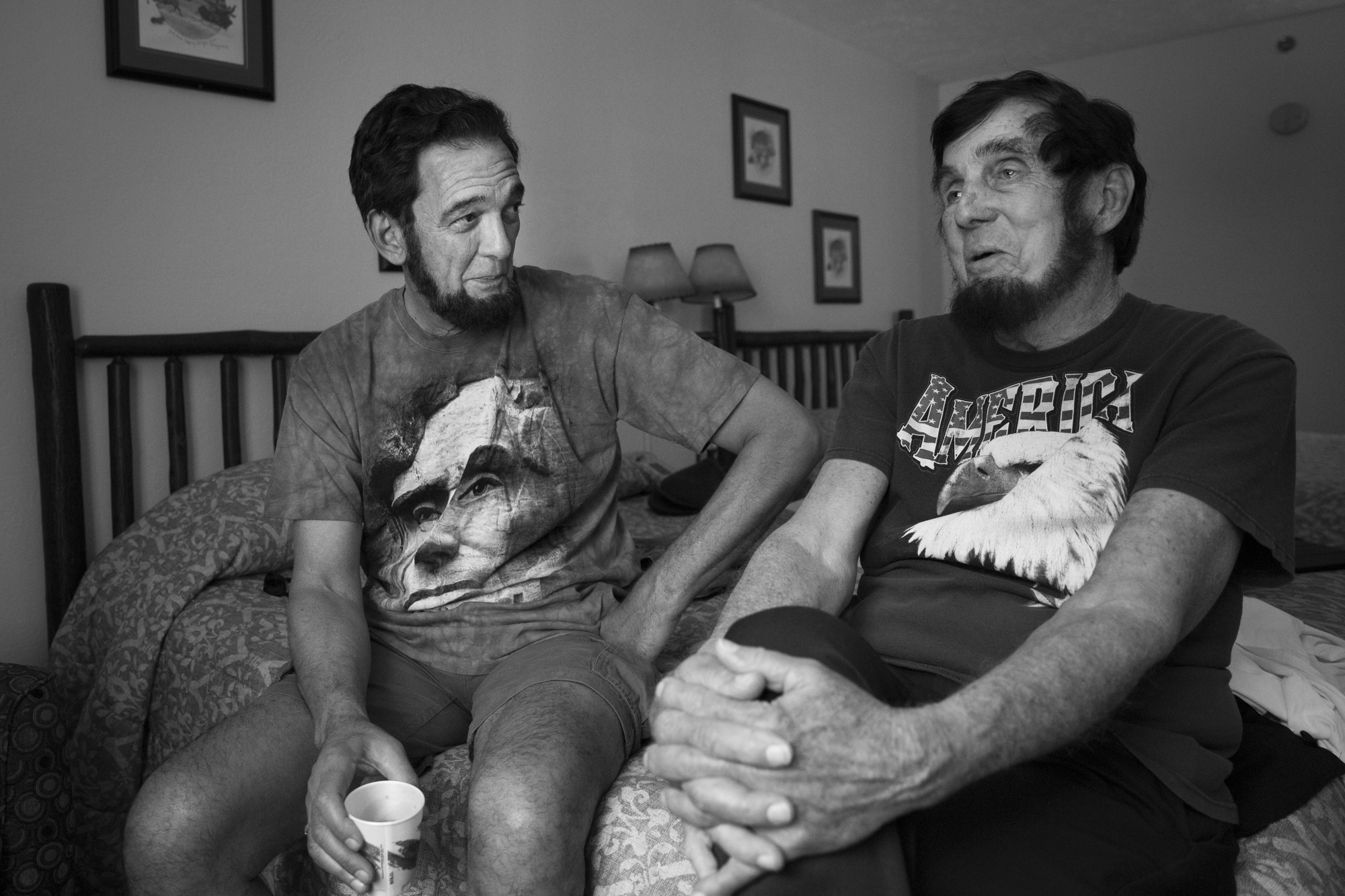 Ron Carley of Detroit and Jim Sayre of Lawrenceburg, Ky. talk in Sayre's hotel room. Sayre, who planned the first Association of Lincoln Presenters convention in 1995 and has been to every one since, said that he wanted to take Carley under his wing. This was Carley's first ALP convention. 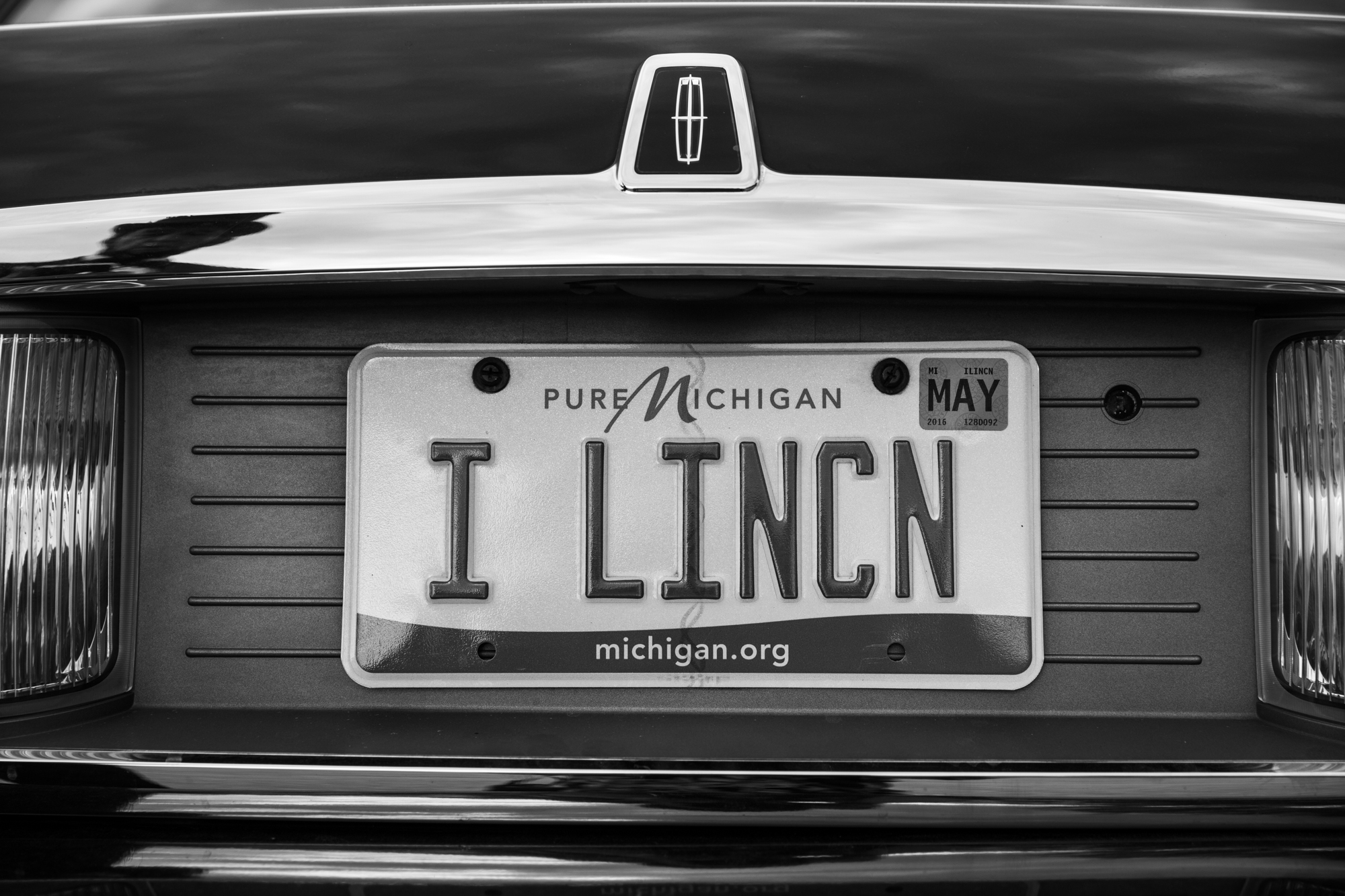 Ron Carley of Detroit drives a Lincoln Town Car with a vanity plate reading "I LINCN". Carley's first booking as an Abraham Lincoln presenter was for a Lincoln car dealership. 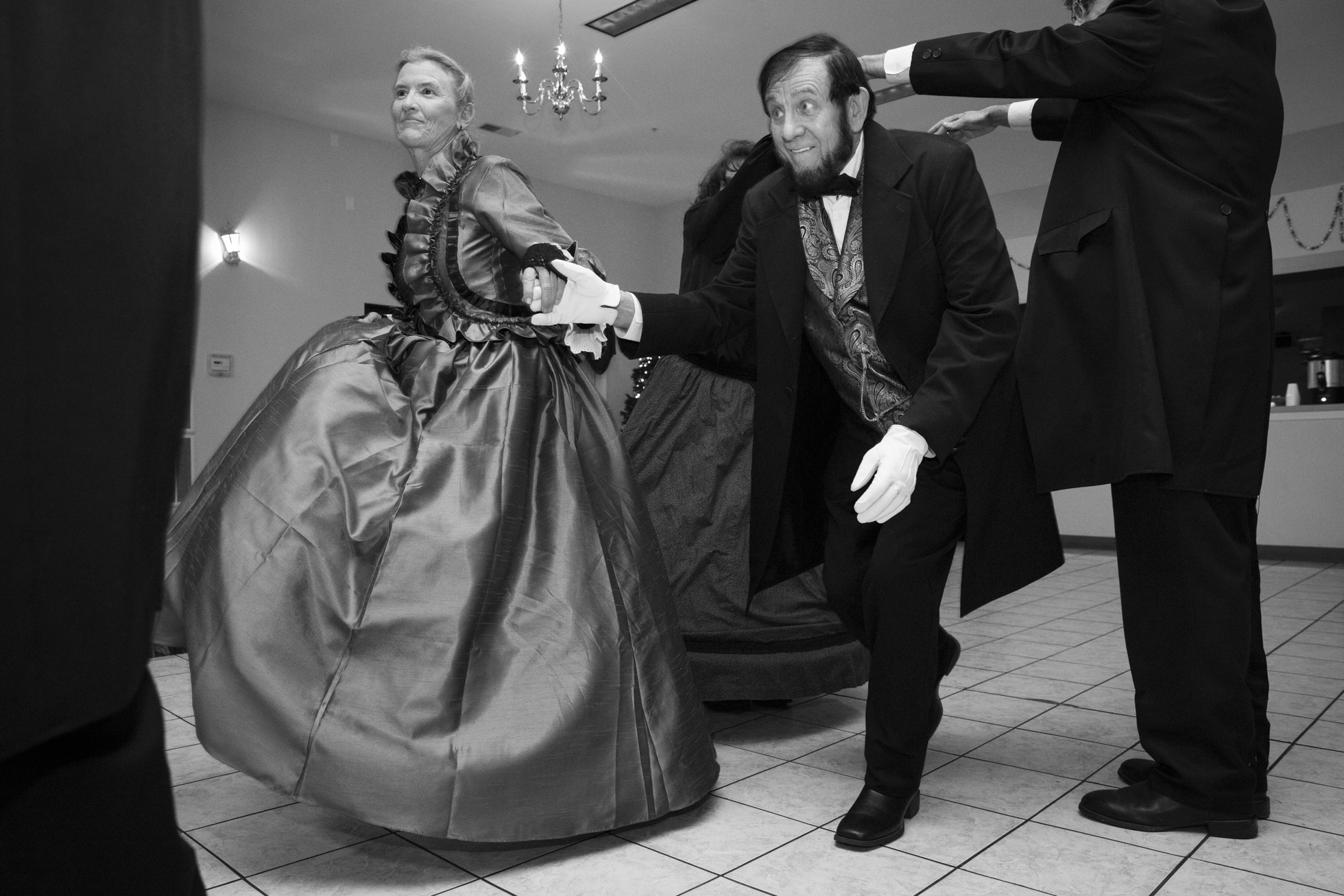 Connie Luthy of Lamar, Ind. and Tom Wright of Oak Ridge, Tenn. dance the Virginia reel at the annual gala. 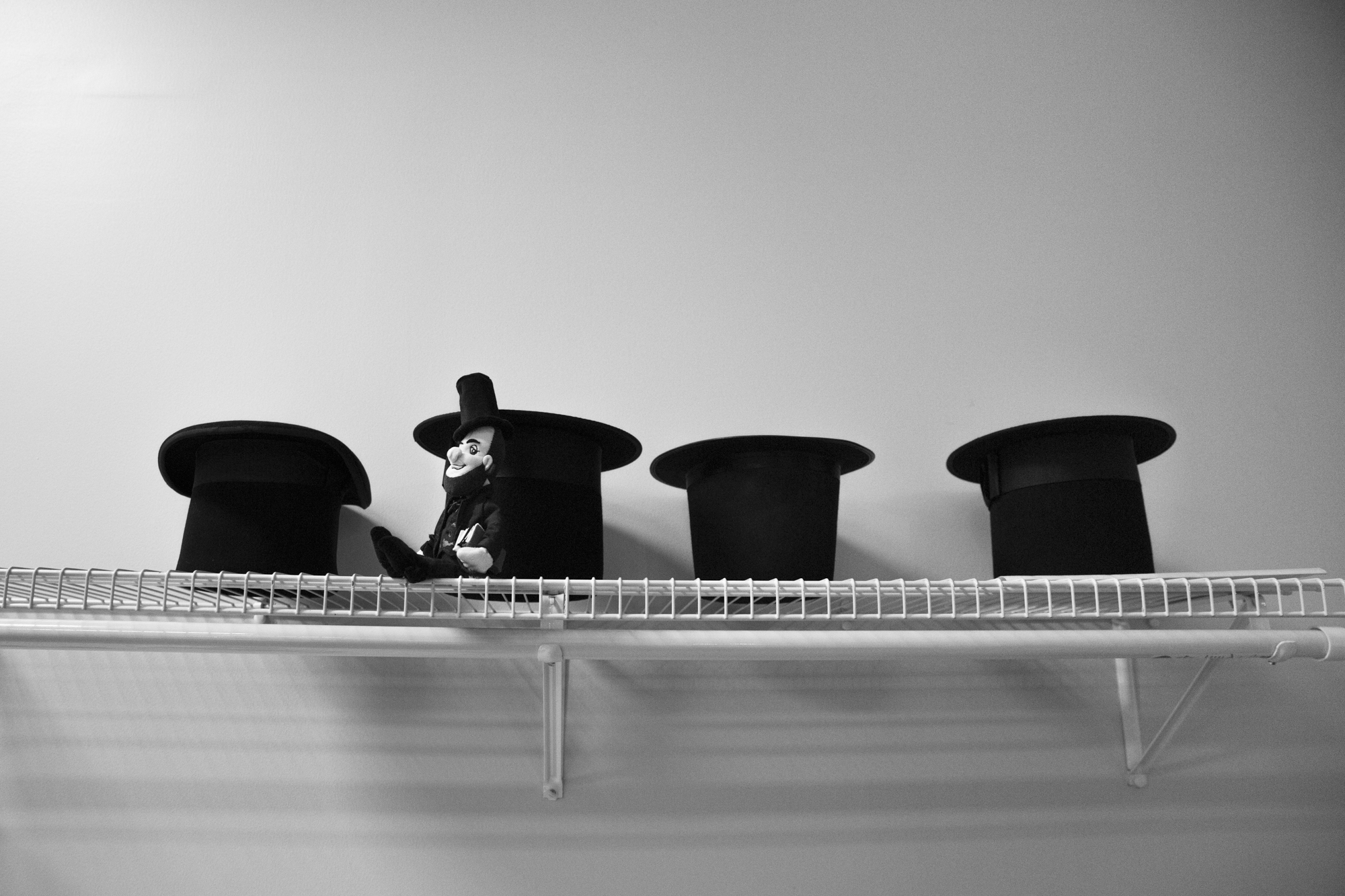 An Abraham Lincoln doll, purchased at the silent auction, rests against one of four top hats stored on a shelf during the gala. 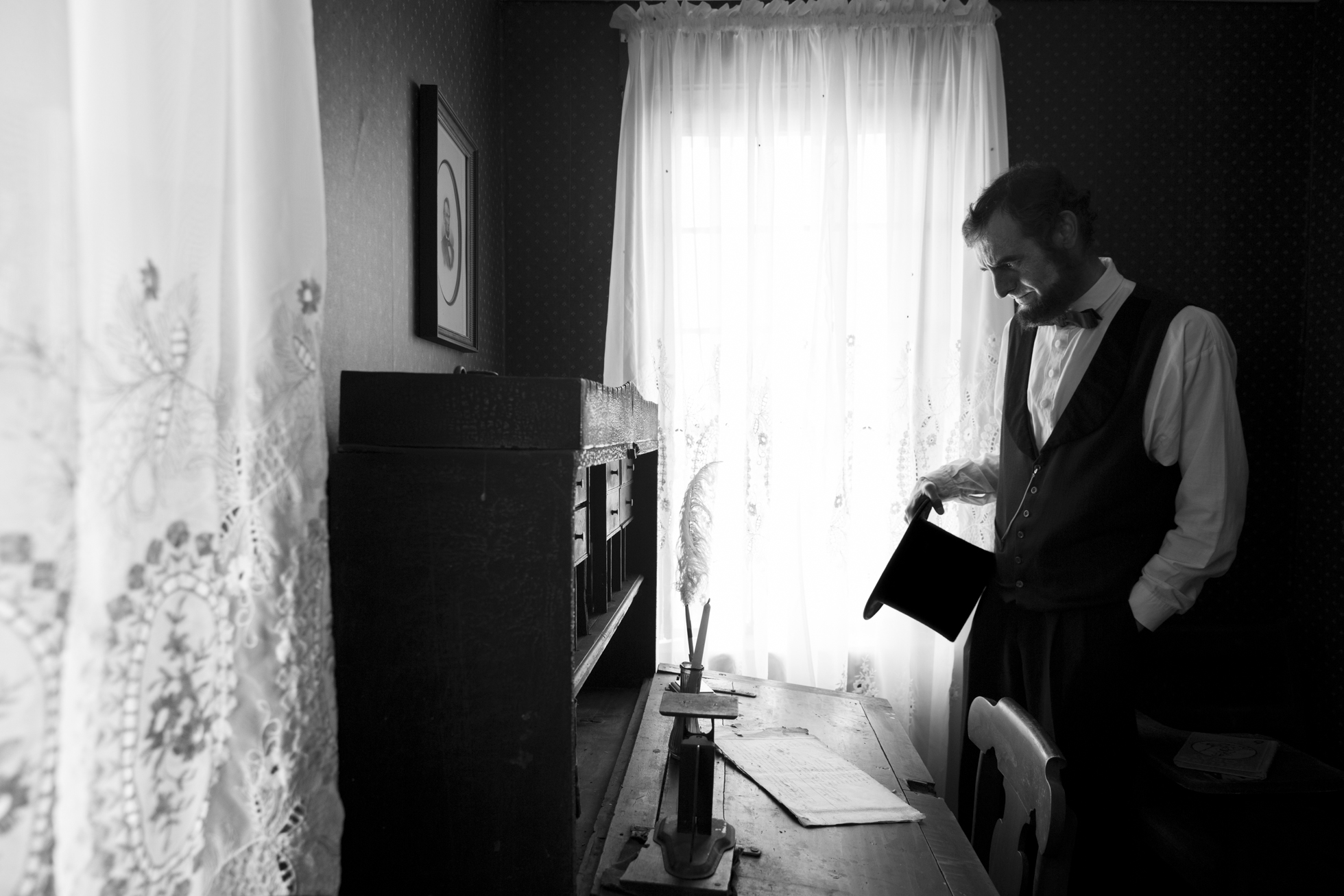 Kevin Wood of Oak Park, Ill. looks over Squire Samuel Pate's desk at the Pate House in Lewisport, Kentucky. In 1827, at that desk in that room, Squire Pate presided over Lincoln's first trial in which Lincoln defended himself against charges of operating a ferry across the Ohio River without a license. Squire Pate sided with Lincoln in the case. Wood, dressed as Lincoln, said being at that desk made him think about what it would have been like to be 18-year-old Lincoln defending himself for the first time.

"What if the squire ruled against him?" thought Wood. "Would that have turned him off from the law or was he the type of person that would have become more determined to learn law? I like to think he's the latter."